The slow slog through November

We are nearing the end of one of the dullest, most depressing months of the year – November.

Warning: This post contains oodles of cat pictures.  It may take a while to load. Regardless, I feel that the Internet does not have enough  >^..^<  As compensation, this post contains more of the popular cat comics that followers seem to enjoy.

So… November. I pushed myself to continue my morning routine of stretching and breathing – with some interference and some coaching.  Some days, half the battle is getting started, getting dressed and out the door to catch that first bus in to the city. Ugh.

No, I did not take part in that month-long novel writing ordeal that others subject themselves to. I just don’t have the time.

Don’t mind me. I want to show you how it’s done.

Half the battle is getting started.

I traveled for a funeral, a mini family reunion and a stroll down memory lane. Due to a limited mobile plan, I made do with no cell coverage in the Muskokas.

I quietly celebrated a loved one’s birthday, wishing him a happy day from afar.

It rained. Canadians survived the drama and incredible circus leading up to and after the US elections.

We experienced a Super Moon. I continued to perform my morning routines. Mr. Snuggles did too.

Mr. Snuggles drove me crazy early mornings with wanting to go out on the balcony to howl at the moon (I think).

It rained.  It rained again. I got a new cell phone and expanded coverage plan. Yay. I paid off all debts. Yipee! That’s one 2016 goal accomplished.

In the Ottawa Valley, we got a bit of snow to lighten things up. Ha ha. I also pulled out my Daylight lamp to brighten up the mood during morning routines. 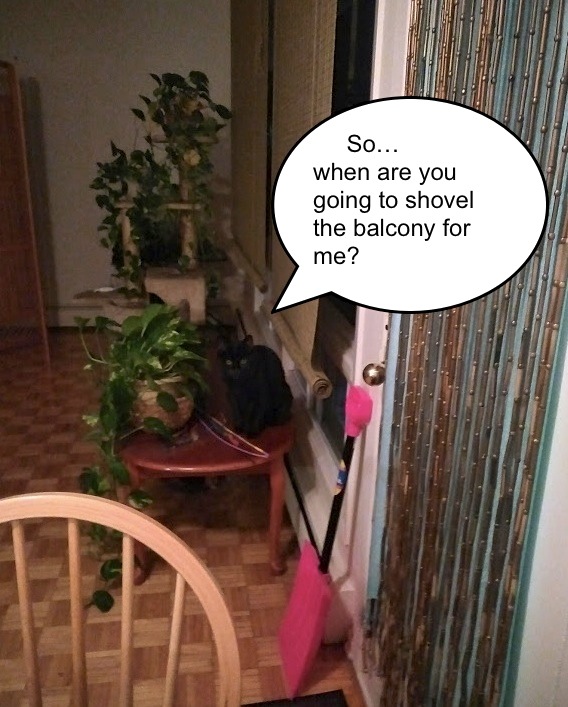 To break up the weekly routine with things I love to do, I would spend three hours of bliss in a local book shop.

I read during the morning and evening commute.  Between the day job and creative writing attempts, I spent plenty of time in front of screens. At times I just wanted to kick back and enjoy some comedies or favourite Star Trek shows on Netflix. Escapism, anyone?

Just a few more days until December. Here’s wishing you a peaceful, joyful and frugal transition into the winter holidays.

Thanks for dropping by, waiting for the pictures to load and not disturbing the Tabby.

Why not read a few excerpts from my novel? Heck, why not buy an ebook copy?

I am Theresa. I am a Mother, Grandmother and intermittent writer. I published a bittersweet novel under the pen name of Florence T Lyon. I am also a real life survivor, part-time RM student, and IT support worker trying to keep up with technological changes. Can't eke a living off of my writing skills - yet!
View all posts by shewrite63 →
This entry was posted in Books, cats, Computers and Internet, Health and wellness, Pets, Travel, writing and tagged apartment life, autumn, books, cat ladies, cat lady, cat pictures, cats, death, depression, funerals, life, light therapy, november, photographs, rain, snow, winter, yoga. Bookmark the permalink.

1 Response to The slow slog through November

This site uses Akismet to reduce spam. Learn how your comment data is processed.